In 1988, Fleur d'Orient was founded in partnership with a group of families in India to produce the best incense and offer its customers a pure and natural product. To this day, this incense even has an Ecocert certification.

Marco Polo's Treasures is a fascinating project. We have retraced and retrace physically every day "The incense route" to create genuine incens with primary resins, i.e. those that our grandparents unearthed in ancient times, whit the hope of awakening witchin us slumbering memories hand, perhaps, to relive for a short period moments from the past, offering you a tool that is highly useful for meditation, prayer and all the holistic disciplines.

Relevance 
Relevance Name, A to Z Name, Z to A Price, low to high Price, high to low
Sort by: 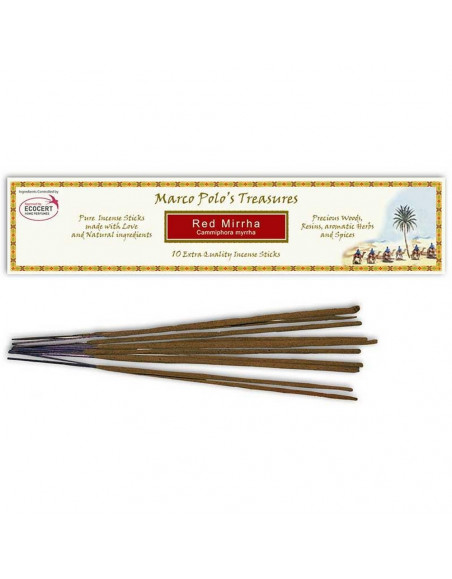 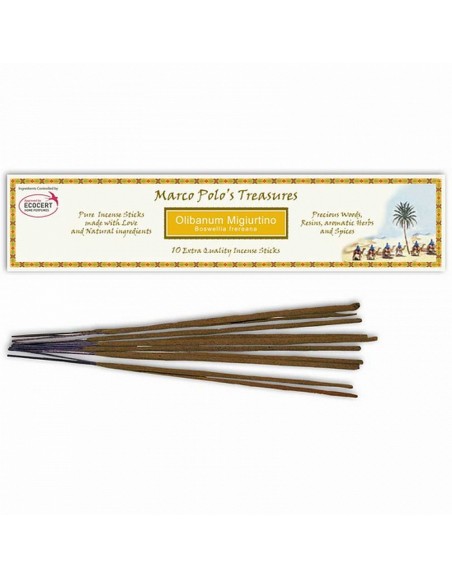 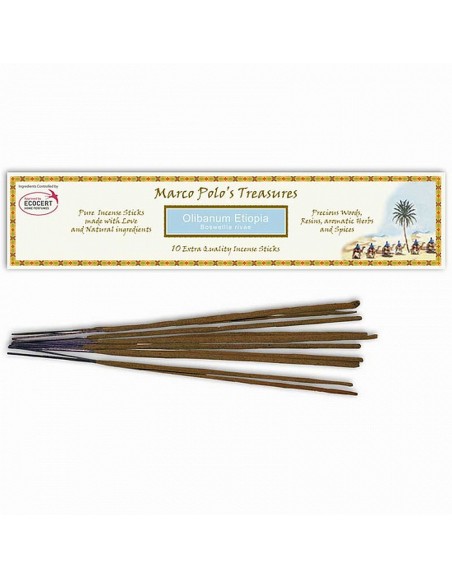 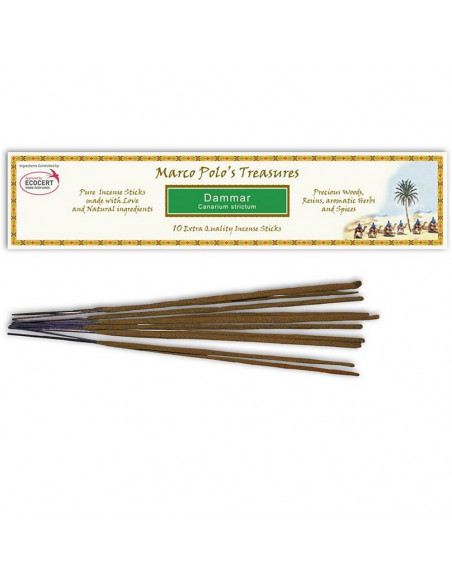 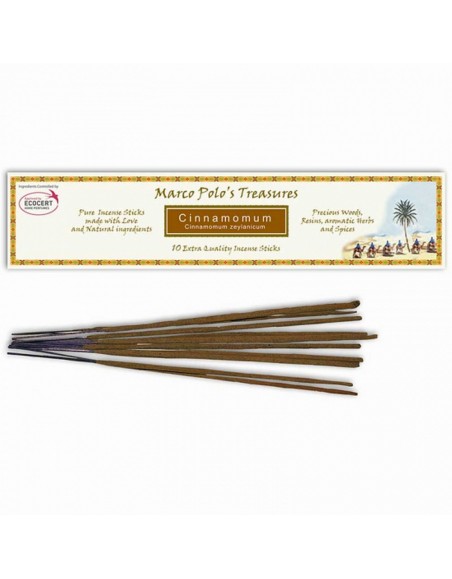 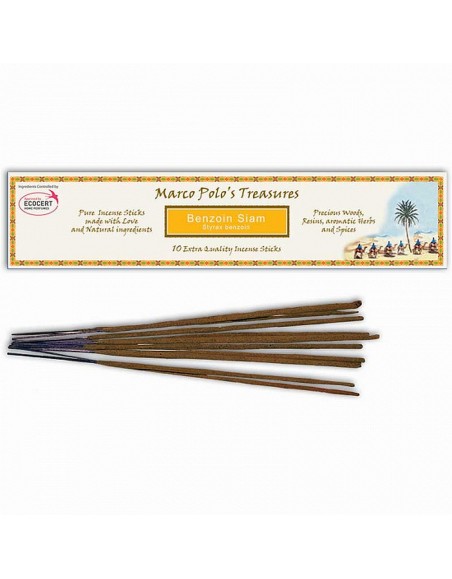 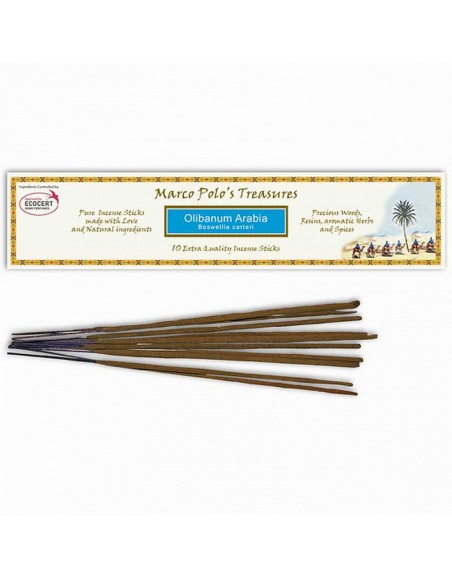 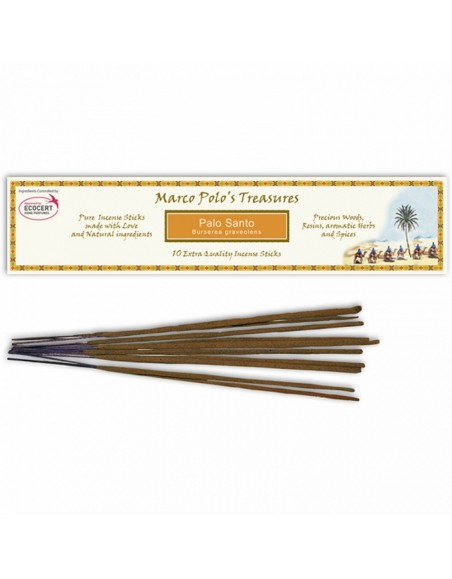 Red Mirrh (Commiphora myrrha):
Origin: A shrub that reaches ten meters in height and grows exclusively in East Africa and the Arabian Peninsula.
Sources dating back to 3700 years bear witness to its use in perfumery. For centuries, it has been used as an anti-inflammatory and healing remedy. According to ancient Ayurvedic medicine, this resin brings inner peace, rejuvenates and revitalizes the mind, purifies the aura, and dispels the distracting factors during periods of meditation and prayer.

Origin: has always been known for its surprising ability to thrive on steep rock faces; this plant is usually found on gently sloping plateaus on the border between Ethiopia and Somalia.
Shape: wood flakes impregnated with resin.
Used always in purification rites.

Origin: India, a tree that grows up to 40 meters high, at high altitude.
Uses: Used for millennia in purification rites.

Origin: India, a tree that reaches a height of 40m at a high altitude.
In Malay, the term Dammar means "light". The use of this resin has the power to illuminate and lighten the dark corners of the soul; useful for fighting sadness, melancholy and depression. Calming.

Origin: Sri Lanka
Form: bark
There are many therapeutic properties of cinnamon that were already known in ancient Egypt, including antibacterial, antiseptic, stimulant and digestive properties. Cinnamon stimulates the immune system. In Ayurvedic medicine and traditional Chinese medicine, it is used for cold-related disorders because it has a warming effect.

Trees reach huge sizes. In China, there are 1200-year old specimens. At the time of Marco Polo, Japanese camphor was worth its weight in gold.
It has a purifying, refreshing and revitalizing effect and promotes concentration. It reinforces consciousness and reduces sexual desire.

Styrax Benzoin is a tree of considerable size (up to twenty meters) that grows exclusively in tropical Asia.
In the East, it has been believed for thousands of years that the smoke produced by burning benzoin would protect the home from adversity and bring luck. In China, it has been used for millennia for medicinal purposes (digestive, antiseptic, etc.). It stimulates sensuality and has a calming effect

Origin: Of the oldest ports of the Red Sea. The seductive and incomparable aroma is due to the strict selection of the Boswellia carteri plantations from which it is extracted.
Used for millennia in purification rites.

Origin: Ecuador.
This tree has been used since ancient times, including by the Incas, as a remedy for spiritual cleansing and for clearing spaces of negative energy. It repels mosquitoes and flies. It is an anti-anxiety and anti-depressant. It harmonizes the body, mind and spirit and helps to restore the inner balance. For this reason, it is called "The smell of the soul".